From Patient to Survivor 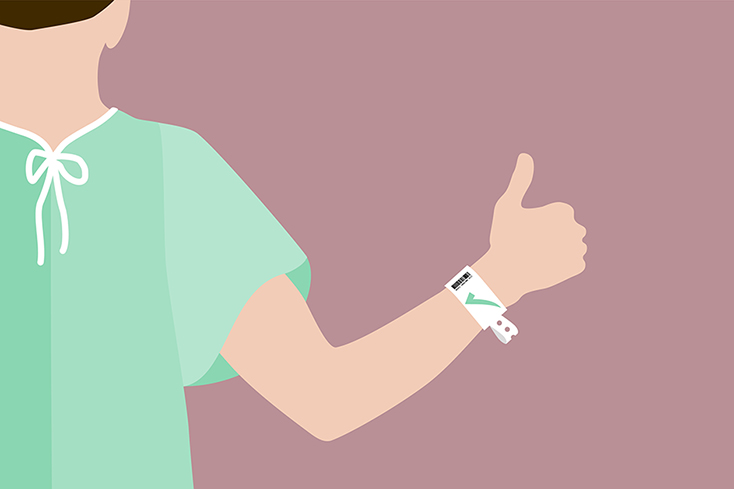 My journey started during Game 2 of the 2013 World Series; starting pitcher was John Lackey for the Boston Red Sox. The game was on the TV in the hospital lobby. They were losing. This is my first of many memories of my hospitalization.

I remember having to strip myself of my clothing to put on a hospital gown. Then, being escorted to a secure wing of the hospital, after which they locked the door behind me. There was a glass-encased office filled with monitors that looked more like a security warden’s desk than a hospital check-in station. I realized I was in what you would call the “psych ward.” I had to turn over all of my belongings — phone, keys, wallet, etc. — and was wrist banded and tagged.

I remember doctors parading in and out of my room. I was alone, under examination by an army of professionals. I never once looked up at them. I have no memory of what each doctor looked like. I was so humiliated. I heard a chorus of “this patient blah blah blah…,” clipboards, stethoscopes and pens clicking.

I remember sobbing in pain on my knees, thinking: What the hell am I doing here? How did I even get here? Who are these people?

It was at that point I realized I could throw everything away and start over — or just throw everything away. The latter sounded much better, easier. But I decided to examine those thoughts. All of a sudden, I’m thinking I’d be better off dead. How did I arrive at that conclusion? As if contemplating tomorrow’s forecast, it was that easy to consider?

Finding The Inspiration I Needed

The next part of my journey was outpatient treatment. Three days a week during evenings after work, I saw a mental health professional to process events from my life for ninety minutes, took a break, then learned coping skills for sixty minutes.

My first day in outpatient was with a meditation specialist. I worked on breathing. That’s it; breathing! I gained a new vocabulary of dialectics, mindfulness, boundaries, modeling and my favorite, “wise mind.” No longer was I thinking, What the hell am I doing here? Instead, I started to feel more like a deer caught in the headlights. Progress!

Eventually, outpatient treatment became group therapy. I was surrounded by so many other people going through their own mental health challenges. One person in particular stood out to me. She watched her son die, kept from embracing him by first responders who were shielding her so they could do their job. She was unable to hold her son for his last breath.

About three weeks into the program, five years after his death, she broke her silence for the first time. During those five years, she never made her bed, nor did she once sleep in it. Depression. Grief. Loss. Isolation. But because of her, I found hope. When she spoke, I saw resilience and a desire to get help. Isn’t this the battle we’re all fighting? The moment when we can break down or open up. Only then do we realize that we are frail, imperfect human beings who need others to move through life.

Six years later, and I have summed up what I’ve learned into one phrase; words that were recently expressed by an individual I was counseling. I asked, “What does help look like to you today?” The reply: “I just want to know that somebody cares about me.” Crisis counseling is a vital piece of my journey’s puzzle.

Today, I am in recovery. “Today” involves therapy, medication management and coping skills. I can move through each day and each battle with the tools and people who have helped me along the way. “Today” also means that I accept that I have bipolar disorder. After all I went through, I am a survivor — and you are, too.

Carlito Cabelin has a 20-year career in banking and finance. He works part-time as a lender providing short-term financing to businesses. However, he considers his full-time work and passion to be serving as a crisis counselor for those at high risk. He lives with his wife, their two teenagers, pug Mila and cat tulip in Hoboken NJ.

Out of an abundance of caution, NAMI Gulf Coast staff will be working remotely until further notice.

We will continue to answer Helpline calls from Monday – Friday, 9AM-4PM.